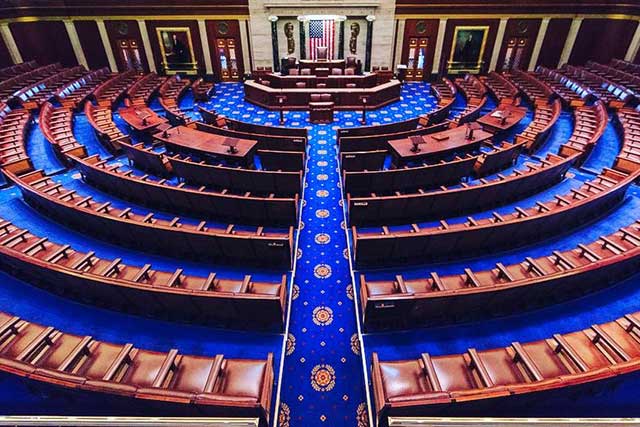 The Recording Studio, US Government

Mediaflex-UMS workflow and Asset Management software supports multiple simultaneous users and provides a tape-free system with immediate access to recordings, as well as secure, permanent storage. The solution offers near instant access to live recordings allowing hundreds of users to search, browse, clip, and raise orders to deliver content to a wide range of distribution channels, all via a simple intuitive web interface that requires little to no training. 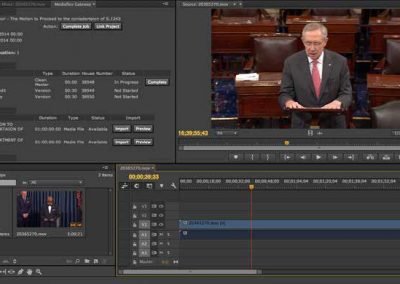 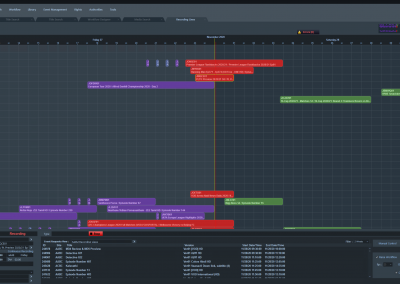 TMD has implemented its media asset management and workflow solution, using its Mediaflex-UMS (Unified Media Services) platform at one of the most important legislatures in the world. The Recording Studio within this Government installation wanted a tape-free system with immediate access to recordings, as well as secure, permanent storage. The solution needed to offer near instant access to live recordings allowing hundreds of users to search, browse, clip, and raise orders to deliver content to a wide range of distribution channels, all via a simple intuitive web interface that requires little to no training.

It is a cornerstone of democracy that the decisions of a nation’s lawmakers should be visible to that nation’s citizens. For this reason, it is now accepted that all the debates of a legislature, in the main chamber and in committee, should be captured on video and subsequently accessible to provide a historical record.

TMD has implemented such a system, using its Mediaflex workflow and media asset management software, at one of the most important legislatures in the world. This case study describes aims of the system and how they have been achieved to deliver fast, highly reliable, and user-friendly capture and access.

The system allowed the legislature to move to a tape-free environment, capturing HD and SD content at a variety of profiles.

The requirement is to make a historical record of the legislature. Whenever the main chamber is open it must be recorded. This recording is stored locally, and is also preserved in the national audio-visual archive. This content must be made available as close as possible to real time. Users must be able to search, browse, and clip a recording within seconds of its commencement and raise orders on the system to deliver content (either clips or edited pieces) to a wide range of distribution channels.

The working practices of the chamber, which have grown up over centuries, includes debates which can run uninterrupted,over a number of days. The archival system needs to cope with recordings that may be 72 hours or more in length.

As well as the main chamber, all deliberations in committee rooms must also be recorded. The system also includes studio facilities, available to members of the legislature, to allow them to record their own comments on debates and decisions to use in video packages for their constituents.

Finally, as a service to members and their staff, the system also captures and retains for a short while, broadcast news programmes. These are edited to remove commercial breaks and replayed as a loop over one of the internal video channels in the building, as well as being accessible for search. The system, therefore, needs to be able to input and output content in a number of formats, and support both SD and HD.

All content needs to be available to the members through a simple user interface, allowing them not only to research past debates but to order clips to be delivered to them, or to create work orders for video packages from a team of craft editors.

As this archive is a matter of national record, the system must capture both the recording and the associated metadata in a highly resilient manner. The system needs to make, at a minimum, two truly independent copies of each recording. The control platform must have no single point of failure and allow key operations to failover in real time, with no loss of system performance.

A key part of this requirement is the ability to capture live recordings into the archive system. In general, sessions in the main chamber and in committee rooms are planned, and recordings can be scheduled and automatically started, but there is also a need for the ability to trigger instant recordings.

Because of the nature of the legislature, multiple recordings can take place at the same time, as a number of committees may be undertaking hearings simultaneously. The main chamber may also be in session, and individual members may be recorded in the studios.

The special nature of this particular body means that debates can run for extremely long periods. A single debate in the chamber running for, say, over 70 hours has to appear to users like a single recording, but in practice this would lead to unreasonably large files. So, the logical debate file will actually be made up of a number of one-hour practical files, linked within the metadata as a single entity.

Conversely, some debates will be paused, for instance for meal breaks. On resumption, it will logically be the same debate so will need to be part of the same recording.

Stenographers, working for the production services team create, in real time, verbatim transcriptions of all chamber and committee room sessions. The transcriptions are added as closed captions to the associated video as it is recorded. The combined video, audio, and transcript, form the official record of the session. The Mediaflex-UMS (Unified Media Services) archive system extracts the closed caption information from the recorded video and uses this to create time-stamped descriptive metadata which is then readable and importantly, searchable by the system users.

The archive must be accessible to the members of the legislature and their staff. The system provides a browse resolution proxy of all recordings with the ability to search for content based on the speaker, the time, the session, and keywords from session transcripts. System users are able to access content within seconds of the start of any recording desks. They can call up full resolution content if required,  to explain their actions to their constituents.

If members want a clip from a debate, (usually their own contribution), they simply define in and out points in the recording and the high-resolution file is delivered to them.

If a more complex recording is required, using the archive system, they can select clips and issue a work order to one of the team of craft editors in the recording service. The content is transferred to a Final Cut Pro or Avid edit workstation along with the work order. Once the cut is complete the full resolution file is delivered to the member in any format required.

Similarly, recordings made in the studio, which might be an address to constituents for example, can be checked and clipped in the browse resolution viewer. Once approved by the member, the recording can be delivered securely to any destination as a media file, as streaming media, or on physical media.

These edits, along with studio recordings and off-air news programmes, are retained for a short while (typically 14 days high resolution, 30 days browse resolution) as required. Recordings of the legislature in session, in the chamber, or in committee, are retained forever.

To maintain the integrity of the archive, it must be resilient against any single point of failure. Redundant systems are independent of each other, and where there is a need for switchovers, it is instantaneous and automatic. This includes the ability to trigger scheduled recordings even if the central scheduling system should fail. All content should subsequently be protected against data loss.

TMD Mediaflex-UMS is a comprehensive asset and workflow management platform with a flexible and readily extensible metadata schema. It provides the central point of control and management for the entire system, handling the movement of assets from ingest to delivery to archive, creating proxies, capturing and indexing metadata, and making this searchable and viewable to all authorised system users.

In conjunction with the archive service at the legislature, a metadata taxonomy was devised. By defining in advance the structure of the metadata, it ensures that searches remain valid and comprehensive.

Without a defined taxonomy, the same concept could be described in a number of ways in the asset management database, leading to searchers only finding some and not all of the valid results.

Critical to the success of the project is ease of research: members can use the system with little or no training, and be sure that their searches find all the relevant information.

Central archive staff have a user interface which allows them to schedule recordings, routing video, audio, and data signals from the production teams covering the chamber, the committee rooms, and the studios. They also have the ability to instantly start a crash recording, adding metadata to define the recording after it has started to ensure any unscheduled events are captured.

As part of the quality control functionality, technical staff in the recording facility have the ability to view, in real time, what is current being ingested.

Recording schedules for the server network and related routing switchers are kept locally as well as in the TMD master database. If there should be a network failure, scheduled recordings will still start automatically.

Simultaneous with the dual (for resilience) high resolution recording, a browse resolution proxy is created. The browse encoders support read and write functionality. This allows users to search the archive while recordings are being made, within seconds of the start. Members can speak in the chamber then immediately create a clip of their contribution, for example, without waiting for the debate to finish.

As well as recording the content locally on redundant servers, all debates on the main chamber floor are streamed to the national audio-visual archive. This allows an immediate off-site recording. This feed also includes the metadata, allowing the archive to be completely reconstructed in the event of catastrophic failure at the legislature.

Recordings are also immediately archived to LTO data tape. Two tapes are created in parallel: one is retained on site, the other is delivered to a secure off-site storage facility managed by the national audio-visual archive. Again, the LTO tapes include all metadata. The nature of the archive means that there is no direct correlation between logical recordings and physical tapes, so the system spans recordings across multiple tapes.

The LTO tapes contain video files in MXF wrappers which also contain the relevant metadata. This ensures that the content can always be retrieved at any time in the future.

The two central requirements for a legislative archival system are immediate access, and secure, permanent storage.

This development by TMD, using Mediaflex-UMS, at one of the world’s most influential parliaments, demonstrates comprehensive solutions to these twin challenges.

Within seconds of the start of a debate, the content is available to hundreds of users, via a simple, intuitive web interface, that is easily used with little to no training.

Members of the legislature and their staff can easily search, identify, access, view, select, and clip the content they need, raise works orders to have the content delivered quickly and securely, as media files, streamed content, or on physical media.

A fully redundant architecture means that recordings can be scheduled in advance or started instantly. Once under way, recordings are fed to two completely independent server infrastructures and also fed to a remote off-site facility. The server recordings are immediately archived to redundant data tapes, again to provide for off-site storage.

The result is a system which meets the demanding requirements of visibility and access to debates, and provides a completely secure historical recording.